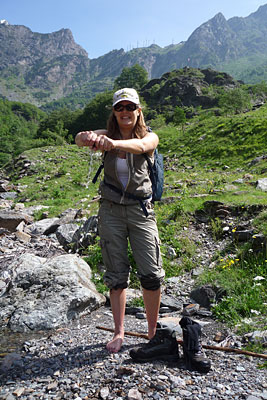 In my opinion the mountain hut par exellence in the Orobian Alps is rifugio Curò. It’s set at 1915 m amid stern mountains in a place where the exposed dark rock face makes the mountains look particularly menacing. At the same time the outlook beyond the hut is definitely a surprise as an extensive artificial lake of crystal clear waters unfolds to the eyes and adds a marvellous hue of light blue to a landscape that is already quite remarkable.

We decided to reach the hut not on the traditional path that wearily winds its way up the slope to end in a last stretch literally carved in the rock, like a tunnel with a precipice of several hundred meters on the open side; we went up along the winter path, which follows the floor of the valley gaining little height until it takes you up by a leg-breaking jump to continue the climb just below the rocks on the other side of the valley from the first path. Next to this way are the Serio waterfalls, the highest in Italy, whose water flow is now curbed by the dam, although they open a few times in the summer and attract a large crowd to watch a great spectacle. Now only a trickle flows to form curtains of water that break up into spray by the time they touch the bottom.

As we missed the bridge over the river, we had to ford it where the water was shallow. I crossed first under Paola’s apprehensive gaze, while the two others were still searching upstream for a passage on the rocks. Then I directed Paola from the opposite bank to do the same, but no sooner had she taken the first step than I saw her collapse with an arm into the icy water dipping her walking boots in the stream! We were both split up with laughter thinking of how she could continue hiking in these conditions. Luckily Andrea had a pair of walking sandals, so he could give up his boots to Paola, while the soaked pair was hung outside a rucksack to dry.

The ascent was quite tiring for me because I was walking at a slower pace than mine. After the walk on the ledge that is equipped with ropes, we eventually reached the hut and we enjoyed the beautiful sunshine, getting quite sunburnt.

On the way back Paola, who by then had ripped her trousers on the bum, was again the victim of another hilarious incident. We sat down on a rock to wait for the others to arrive, but when she tried to get up she felt the back pocket stuck to the seat. Someone had just refreshed the directions with white paint and now there was also a reverse copy on Paola’s trousers.

We had a pizza at Valbondione to close the day. Paola was definitely the protagonist, with her candour and her attitude and look that we all consider very unmountain-like, but rather beach-like. Still from time to time she carelessly joins us for a hike, probably when enough time has passed to delete the memory of the previous knackering experience with us, and we are always glad to have her brighten our day.