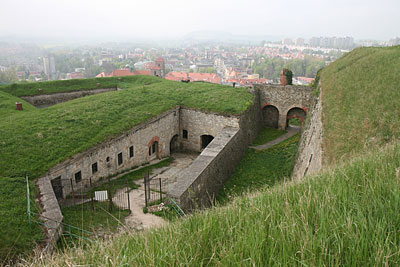 Kłodzko was formerly called Glatz – and this is not just a learned detail, because this German name gives evidence to the region's history. The town, together with swathes of Silesia, was a dominion of the crowns of Bohemia and Habsburg, fell under the Prussian Kingdom, and only after the last war did it join Poland. The impressing fortress that looms over the town – now the stern antagonist to the pretty buildings, the churches, the ornate steeples and bridges below – was a key point of control over a strategic corridor for whatever dominating power. The fortress can be visited and it is an amazing sight, although, to be true, I felt that its full appreciation would have required a better understanding of military defence architecture. However, I let the mighty stone walls and the vast courtyards talk for themselves while I roamed on a lonesome visit, imagining the garrison once stationed here and the harsh military life that the soldiers led.

After WW2 a forced plan of migrations was put in place to evacuate ethnic Germans from the lands that were to be occupied by Poles. Glatz was also affected by this operation of arranged ethnic cleansing. When a war is over, its aftermaths involve settlements that painfully upset individual lives. The humiliating defeat and the infamy of Nazi crimes on the whole German nation were compounded by the hardships inflicted on ordinary people who were only guilty of having been born in lands given over to the winners.

At the opera house in Breslau I became aware of this unknown aspect of the last conflict thanks to a man from Berlin. We happened to have both come to sit in the wrong tier and as we moved to our right seat we got into conversation. His grandmother, he told me, was forced to leave Silesia to West Germany after the capitulation. He was taking that weekend trip on the spur of his origins, but he could only count on fragmentary information and didn't even know the name of his grandmother's native village.

That Silesia was a land of great changes is also signified by the Churches of Peace. Three centuries before, at the end of the Thirty Year War, the Peace of Westfalia allowed minority-turned Lutherans to build three churches outside the walls of as many towns in by then Catholic land, on condition that they were made only of wood, straw, mud and loam, they didn't have steeples or bells and they were completed within a year. The result of these restrictions were three architectural wonders, capable of holding an amazing number of worshippers, including in the count sitting and standing places of all three tiers. Of the two remaining churches, I visited the one in Świdnica on a Sunday morning, just at the time when a very sparse elderly assembly was gathering for Sunday service. The pastor made an entrance wearing a black frock with two white ribbons from his collar. He led the service stepping alternatively between the altar and a side pew, and nicely acknowledged my presence with a greeting and by announcing the readings in German. 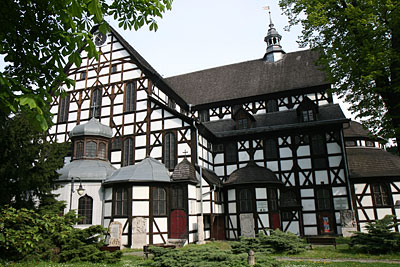 The handful of people convened, singing hymns and praying, looked like an endangered species that has painfully made it into the present era, but is left without any certainties as to its future survival, not unlike the Saxon communities left over in Transylvania after the fall of the Berlin wall. Despite the desolation of its present state, the church emanated a lot of character. The vast interior spaces and its decoration were the proof of its former glory and so were the old tombstones shaded over by tall trees in the overgrown park. 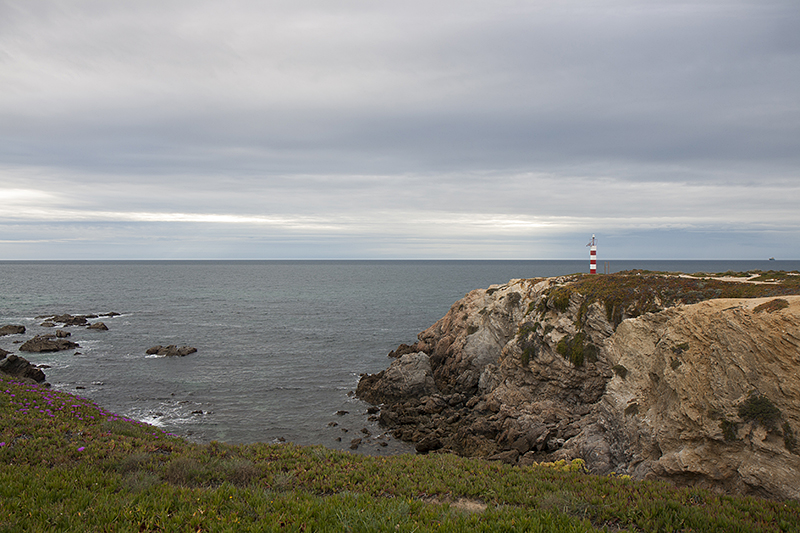