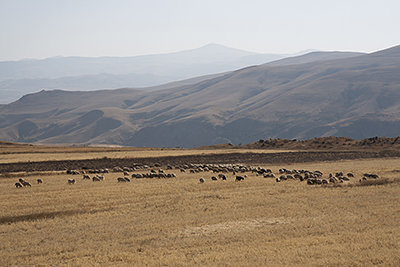 Sisian is a town set in the midst of yellow fields with a distant crown of mountains all around. Coming from Goris, 400 m higher, I spent one night here in order to see the prehistoric standing stones. You can walk to the site, it's about 6 km and therefore only about one hour's walk away, although the sun and the hot wind added some difficulty because of the dehydration effect. I had to keep drinking to make up for the imperceptible incessant sweating. Very few cars ply the dirt track, but even if I was not hitchhiking, someone took pity on me upon catching sight of someone walking on this desolate heath. A soldier gave me a lift to cover the last stretch.

The field was impressive for its amount of stones, but also for the colours of nature all around. The dry yellow grass was juxtaposed to a light blue with white puffy clouds in the sky. Further down the valley large patches of black marked the fields where fire must have ravaged the hay.

The next day, after a hearty breakfast I set out to Jermuk, a water station in the mountains. As there were no buses, I stood at the junction asking for a ride, which came pretty soon. Even at 2,000 m the sun was scorching. There were indeed trees, which is probably what makes the place unusual and attractive for Armenians, but I had been much more impressed by the bare landscapes around Sisian and later the ruggedness around Yeghednadzor. The town boasts big establishments for water treatments, named sanatoria in Russian. I strolled past big stone hotels, into the arcades with the water fountains and around the pond – enough to realise I wouldn't want to spend a night there. I descended to Yeghednadzor instead and had a memorable experience at the Soviet hotel.

The next day I got up very early to catch the only mashrutka to Hermon, which leaves around 7. The streets didn't show any sign of morning activity yet, but a beautiful dawn, as stunning as the sunset had been the previous night, was already highlighting the relief all around. A pleasant breeze kept the town cool before the onslaught of the sunrays. I got to the village of Hermon, at the bottom of a valley closed in by tall mountains. The camping ground didn't have free rooms to offer because of a large group of youths staying. I used the pretext to compress my visit, originally stretched over the whole day, to just how long I would need to climb to Smbataberd fortress from Yeghegis.

A taxi driver offered me a free lift to the start of the path. From there, the ruins were hardly visible, almost camouflaged in the vegetation and the rocks around. The man said I'd need half an hour to climb up and be back, in which case I could take advantage of him driving to town. As I started the ascent, it became apparent that man had never ever been to the fortress on foot: judging by the rough sheer path and the hot weather, I would need at least one hour, add the time to visit. The view from the top was nevertheless amazing. The fortress straddles two valleys and holds a strategic command point over two access ways. Now its military importance vanished, it is still a great place from which to contemplate the dry mountains and the verdant valley bottoms. 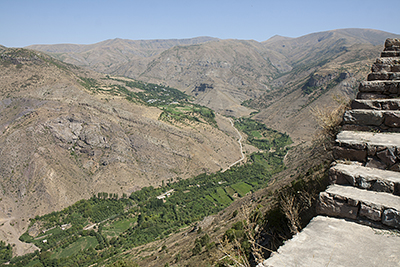 Back in Yeghegis I was extremely thirsty. For a while I claimed possession of the village fountain while a number of youths watched me attempt to deplete their water reserves. It was cool and refreshing, a real blessing. There was no restaurant, so I sat outside a shop whose owner acted to me in a fatherly way. He brought me fresh peppers with cheese wrapped in a sheet of bread, and a slice of tomato. We tried to make some conversation, but in reality there was no need for many words. His hospitality was already communicative enough. As I sat munching at my snack I hatched another change of plans: with practically the whole afternoon in front of me, I'd go to Noravank and return to sleep at the Soviet hotel! 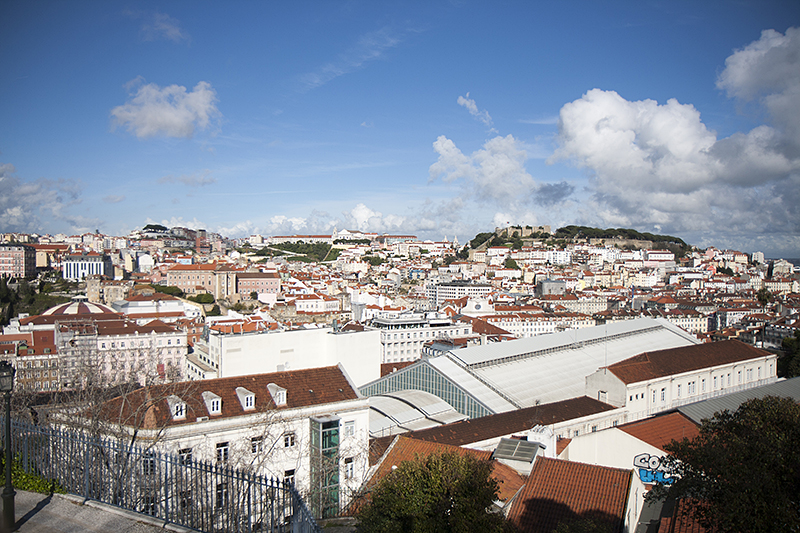