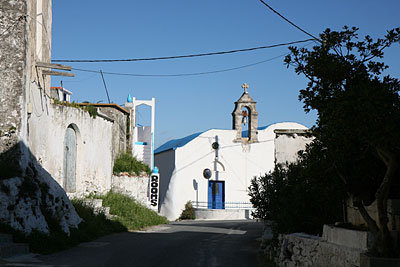 That afternoon was all dazzling light and beautiful sun, but the fierce wind that had risen two days before was still blowing with some strength. Not a cloud was left in the sky after the storm had passed over the island of Crete, leaving behind snowfalls that had affected areas just a few hundred metres over the sea level where I was hiking. On the mountain tops a fresh layer of shining white contrasted with the lush vegetation on the hills. The perfect blue of the sky matched the colour of the sea, only a few shades deeper and almost unreal.

I had walked all the way down from Anopoli at an elevation of about 600 m, spent an hour at Sfakia eating a sandwich next to the WWII memorial, and walked on along the road to Komitades, at the start of the Imbros Gorge. I would have skipped this last leg with pleasure in order to tackle the gorge that same day, but I had stood on the roadside helplessly sticking my thumb up in the face of selfish drivers that didn't deign to even slow down. As usual, only those who had a reason not to stop would justify themselves with gestures referring to a short drive or some other excuse. The only option was then walking on the road for those 5 km, with at least excellent views on the coastline. 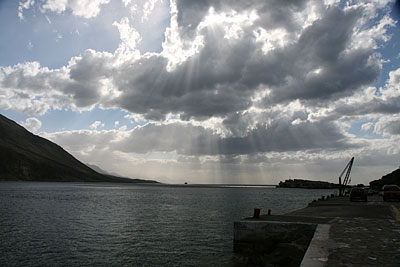 I had been trekking since my second day on Crete. It was meant to be only partly a hiking holiday, but the pride of conquering every single mile with the strength of my own legs was intoxicating. I had come from Paleochora, stayed at Soughia during the night of the storm, continued walking to Loutro and then left the coast in the direction of the mountains.

However, by the time I got to Komitades, my plan for the day had changed to enjoying the rest of the afternoon in that tiny community. I deserved some rest, I judged, and my airy room with an inspiring view over olive groves and the sea in the distance was too great a temptation to resist. Light flooded in through the windows, although the shutters had no lock, and the wind sent them banging from time to time. 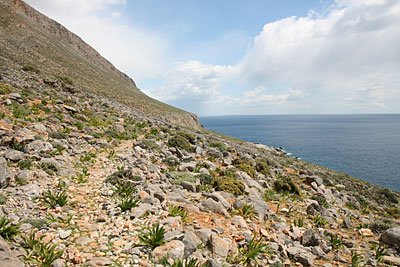 The balcony had seemed a good spot to enjoy the sun and read on "Les Frères Karamazov", at least until a party of vociferating hikers hit the terrace one storey above and sat down with the declared intention of staying only 5 minutes – a resolution obviously hardly compatible with the orders for drinks and snacks that were being made from the restaurant. I thought better to find tranquillity elsewhere. The church grounds seemed an ideal spot: there, in a corner sheltered from the wind, I sat down on the whitewashed masonry bench and let the sun drench me.

A little old woman clad in black came out of the church and glanced at me. I asked when the church service would start that night, it was the Great Saturday midnight mass when the Orthodox Easter is solemnly celebrated. She opened the palm of her hand and with her index drew 11.30. I said I'd be present. 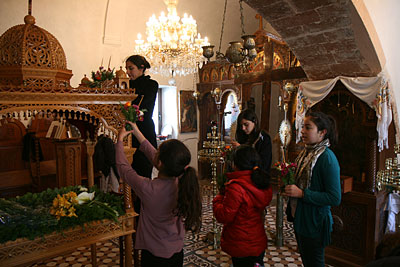 It was the Holy Week, occurring with one week's delay after the Roman Catholic calendar. The night before I had attended the Good Friday service in the Anapoli church. Since the afternoon a number of girls had been decorating with nosegays of flowers and aromatic herbs the epitaphio, a wooden structure symbolising Christ's bier that is usually carried around the streets in a mourning procession. However, a gale was blowing that night, and it all had to take place within the church walls. Two chanting parties, one of girls and a second one of men, stood facing each other at the head of the two naves, and engaged in repetitive hymns. I stood near the men and watched the script leaves slowly being turned to the their last page as the chant progressed. I wasn't able to follow the words and could only rely on an atmosphere composed of visual and acoustic impressions, but I was not the only one to wait for a quick ending to the long-drawn ceremony. The vocalists exchanged tired glances that found relief in the nearness of the conclusion.

I felt a bit guilty for leaving earlier, but I finally decided to take shelter in the inn where I had taken a room, spick-and-span and still smelling of detergents. The ground floor restaurant was lively with punters playing cards around a table, while another group was huddled around the burning stove. I ate stuffed peppers and tomatoes with a glass of wine, then I also warmed myself by the fire. The landlady, returned to Crete after many years in Brooklyn, was playing on her tablet keeping an ear on the conversations that were going on around, occasionally throwing in a word here and there. 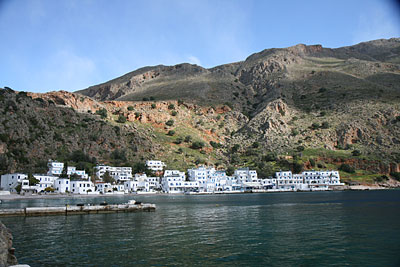 The weather-beaten man next to me had been a mariner – a cargo-ship sailor – and had sailed the seven seas; he had touched all the ports of the Mediterranean, of Asia, and America, endured storms, been at sea for days on end when only water is in the offing. I elicited some story-telling as he ordered two shots of raki for a toast with me, minutes before another customer paid a round to us all. The welcoming atmosphere, the man said, was a common trait in the hospitality culture and the traditional set of values of the Mediterranean – which as a northern Italian I only partly share – is the same in all the southern ports he had called at, be they in Greece, Italy or Spain. But when the talk shifted to politics I felt there might open a rift between the two of us in the common ground he had just marked. I was not keen to discuss the drawbacks of the Euro and the necessity of austerity policies for Greece, especially after an accusing mention to the hefty public debt of Italy and an alleged disparity of treatment with his country. I distractedly agreed to his opinions hoping for a change of subject. 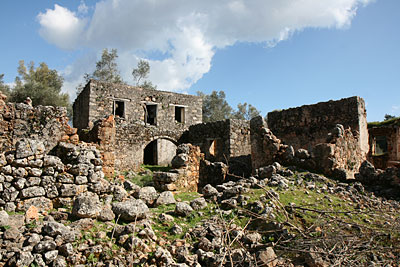 Earlier that afternoon I had walked to the gaping chasm of the Aradena gorge. A day before I had passed its mouth opening towards the sea where sheer rock walls enclose a dark mysterious passage of disproportionate dimensions, like the entrance to the realm of the Hereafter. But here at its start on the highlands, I could see the gorge from above, a deep cut that lost itself into the distance. I needed some time before I could make up my mind and walk across the metal trellis bridge that spanned the two sides at a giddy height. I did so only forcing myself not to let my gaze slip through the cracks between the wooden boards down to the bottom of the crevasse.

On the other side an abandoned village was intermittently lit up by passing flashes of sunlight from the gaps in the clouds. The scene was like a live performance in which the spotlight welcomes the protagonist's entrance and follows his movements on stage. When the sunrays hit the stones of those tumbling houses their colour turned to a beautifully warm hue – and a lovely picture was created on the backdrop of the wind-swept Lefka Ori snowfields. But this spotlight was lit on a scene without actors to an effect of desolation, that however didn't produce a sensation of loneliness; life, or the memory of it, was present in those arched porches that must have witnessed the farm chores around the year, births and deaths, family stories along the ages; life was present in the burgeoning nature and the few sheep grazing around the ruins. I descended into the gorge. The bridge now looked like a toothpick laid across the edges of a cup, as seen from the perspective of a bug fallen to its bottom, a distant black silhouette against the blue streaked by scurrying clouds. The goats retreated as they sensed danger at my approach in their nearly exclusive territory. 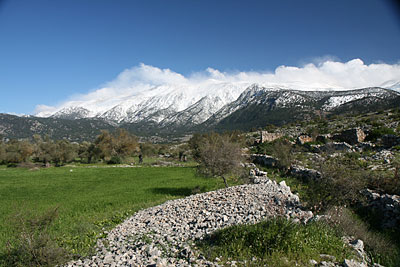 This unusual spell of wintery weather laid bare the harshness of the Cretan environment. The rock-strewn fields were swept by the icy wind blowing in gusts that risked tumbling down anyone unprepared to withstand their brunt. The vegetation is reduced to the minimum that can grow in this environment and at this altitude. Some trees and bushes have trunks contorted by the effect of age and stunted growth, but somewhere else beautiful olive groves show the presence of farming. Crete, whether with its redolent pine-tree forests, its mountains and its see, had captivated me. 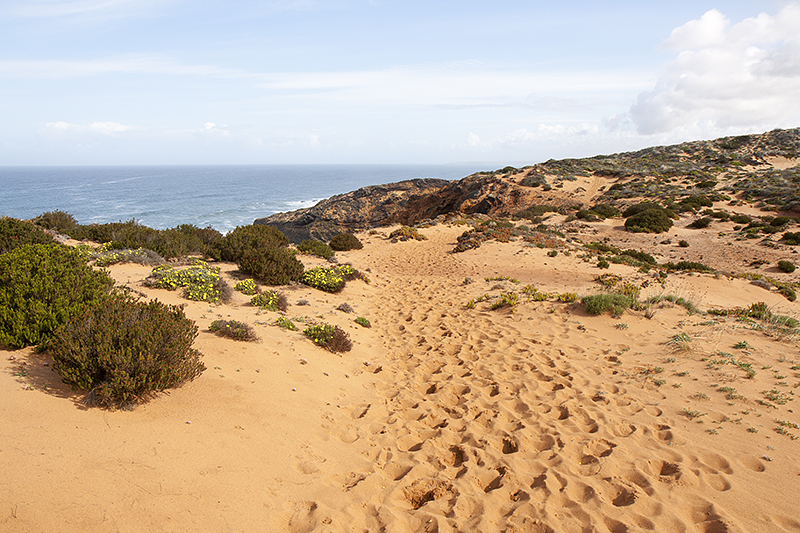