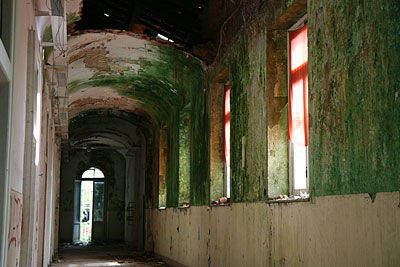 In the last couple of months I have made two experiments of urban exploration. The first time the idea was triggered by the description I read of a theatre show centred on the abandoned lunatic asylum of Mombello. The short introductory text was enough to make one's hair stand on end, and to whet my appetite. That's why I proposed the plan to a friend who's a keen photographer, and on a Sunday morning we were out on the errand. The place was easy to find and I was surprised that we had not a fence to climb over, but an open gate because on the same grounds there are units such as a high school, an orthodox church and a residential community, all alive and well.

The functioning buildings are scattered in a large park and are interspersed with the abandoned ones that are supposed to be off limits. But the orange barrier fence around them was torn down in various places and the keep off signs seemed to be there for a crowd of blind people. Since the hospital was closed down in the 1990's these wards have been thoroughly explored, squatted, vandalised, photographed and filmed by so many people that they hold no more secrets anymore. Trespassing the property doesn't feel like an offence, but I must say that walking around the place was a thrilling experience.

Most of the buildings develop on two storeys around an inner court. The feeling is very spooky when you see the beds, mattresses, rubble falling from the vaults, shards from the shattered panes, graffiti on the walls and often an eerie light that comes in through the windows to highlight some strange detail or create an uncanny atmosphere. In the first building we found heaps of medical records scattered on the floor, mainly work certificates from the 1970's, of people who, according to their date of birth, could well be still alive. Then there were x-rays, and I concluded that must have been the general hospital.

However, upstairs in another building things looked different. The labels stuck on the doors bore the inmates' surnames, which suggested the rooms must have been used for long-term, perhaps permanent, residents. This wing was shabbier and, in my eye, even more attractive, but the climax was reached in the next building where, around a yard that had become a real jungle of trees and weeds, the originally white vaults of the high ceiling corridors were covered by bright green moss and the windows had blood-red curtains that filtered the sunrays. Who knows in which bed died Mussolini's illegitimate son, not even 30, after being interned in this asylum on spurious grounds.

Like all hospitals, Mombello was a place of suffering, but its past as a psychiatric asylum was evocative of all the mysterious troubles that affect the human mind. As opposed to this, we found desolate Mombello was also able to serve as a shelter for a homeless person who had set up a bed in a neat corner after sweeping the dust away as best as he could. On the pillow slip faded words written with a black marker read: "We are the boys of last time, we have come to bring you something to eat and for the bed". It was a message of hope to a poor soul stranded in this desert of bleakness.