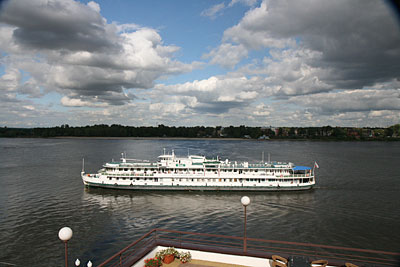 It was another night train, my seventh and last such trip, that took me to Yaroslavl. I was back on the Volga, but an autumnal coolness had swept over the limitless expanses of Russia. The shorts and t-shirts I had worn only a fortnight before around Samara were out of the question. The clouds scampered briskly in the sky to announce the coming of cooler weather, but the cruises still ploughed the river regardless as the tourist season had not come to a close yet.

The hostel was a tiny flat with walls painted in violent colours. A young Ukrainian – probably barely 17 if his looks were anything to go by – was there as a long-term guest. He had fled the war in Luhansk and come to Russia to find safety after his father and mother had perished during an air raid. On that ill-fated day he had suddenly become the sole person in charge of his own life and future, and had decided to flee to Yaroslavl where an uncle lived with his partner – but was soon encouraged to find his own way. He said he had got over the shock, but it was obviously still early days: the wounds left by such a life changing event heal only with time.

Newspapers nonchalantly give abundant information about the tragedies that overturn people's existences and brutally intrude into individual suffering to make it public, but I couldn't treat the real case in front of me other than with the utmost discretion. I felt I was called to respect his sorrow and abstain from prying into the details of his story. At least it was reassuring that Alexander looked at his future with a lot of hope.

There were times when I had also felt lonely during this trip because of lack of communication. At some moments I had been surrounded by company and had appreciated it – the beer and chocolate bar someone had invited me to during a train stop, or the interesting conversations with other travellers or hostel staff. I am solitary at heart, and had enjoyed my independence, but sometimes I had missed my family and friends. On the other hand, taking a step back from the daily routine had the advantage of letting me reconsider my inveterate attitudes towards people, things and work. I had been able to appreciate the importance of each in their absence, ponder the mistakes I had made in my life, and accept to bear certain consequences.

But wasn't this nostalgia of the things I lacked there and then a form of ennui that would manifest itself in its exact opposite form when I was back home? This consideration was enough to blow up the house of cards of my certainties – if I had any left – and suddenly I felt frail. Man needs reasons to fill his life with, battles to fight or causes to defend, not necessarily because of their own intrinsic value, but because he needs ideals to feel attached to. But did I have any ideals, or the process of dissecting man's motives had ended by dismantling those too?

During one of my train journeys I had made a list of the things I would like and could change with the sheer intervention of willpower. I had somehow decided that the 1st September would be a rebirth, like the start of a new year, but I wondered whether I'd have the strength to effect my resolutions once I was steeped in my usual environment. I could hardly take a different attitude towards life if my main weakness was disillusionment.

That night I was huddling on the kitchen settee reading a book, and the fair-haired mother who had accompanied her daughter to settle in Yaroslavl at the beginning of her first university year invited me to have some of their food. We spent the evening under the bright hanging table lamp, like on a long cold winter night. We saw photos, shared tales, and laughed. I might have spent another night there, but the following morning I unexpectedly announced I was leaving for Rostov Veliky on my way to Moscow. My life had to move on.

I arrived by miserable weather, rainy and cool. The hostel was desert, rather disastrous. I went out for dinner in a good restaurant that was nevertheless equally desert. I was served food in a dimly lit dining room. The room that I crossed on my way out of the restaurant had a night club atmosphere with two bored punters and a bar tender leaning behind the bar in front of a wall of mirrors and coloured neon lights. 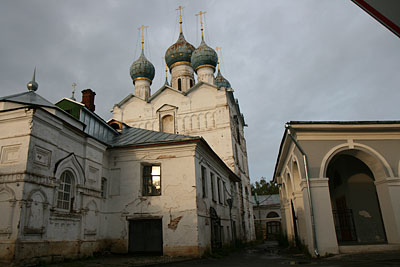 Out on the lake shore a distant group of domes silhouetted against the warm hues of the clouds. I saw a religious procession move around the compound accompanied by the pealing of bells from the belfry that marked the most solemn moments. I envied their faith. A priest dipped a brush aspergillum in a bucket of blessed water and sprinkled the crowd. I was determined to watch as an observer, but the powerful sweeping gesture sent drops of water in every direction and I felt that my eye was inundated in spite of the glasses I was wearing. Did I say I lacked conviction? The water into my eye made me cross myself on the spot, and I was instantly converted. I only hoped the effect would last long enough. 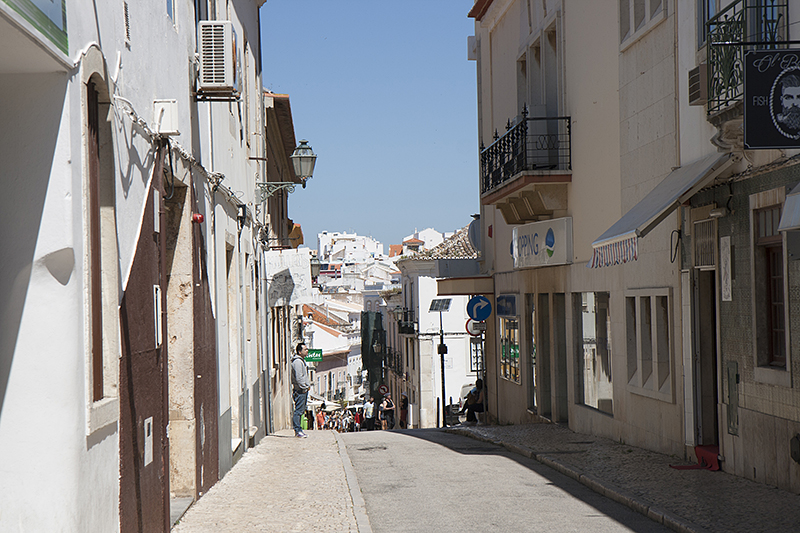